OK, here’s the second cheeky wee extract from Smokeheads – I’m running one every day this week. Spread the word. And/or buy the book here.

This is where our four intrepid smokeheads meet the law on Islay for the first time.

Roddy looked in his mirror. ‘Aw, fucksticks. Adam, I thought you said there weren’t any police in this backwater.’
Adam turned to see the flashing lights of a police car right up their arse.
‘I said there weren’t many. Well done on finding one within fifteen minutes.’
For a moment it looked like Roddy was going to try outrunning them.
‘Roddy,’ said Ethan from the back, a tremble in his voice. ‘Come on, pull over.’
Roddy considered this for a long moment, then took his foot off the pedal. ‘OK, Mortgage Boy, have it your way. But I’m waaaaay over the limit if this clown’s got a breathalyser, so hold onto your fucking hats.’
They pulled over and sat, The Killers still blasting away.
‘Turn that off,’ said Luke.
Adam reached for the button and looked at Roddy. ‘Just take it easy, OK?’
Roddy stared at him as if he was a stroppy toddler. ‘Trust me, Kiddo. When have I ever let you down?’
An officer approached the car. Roddy pressed a button and his window whirred open. The occasional snowflake fluttered down outside as the officer filled the window.
‘Out, big guy.’
Roddy smiled around the car as if this was all a huge laugh then got out with an exaggerated sigh. Adam leaned over to get a better view. The copper was big and mean looking, tight muscle under his protective vest. Roddy was gym-fit, but this guy looked like he’d earned his physique in knuckle-fights or the army. He was a few years younger than them and Adam noticed a heavy gold chain round his neck. Was that police regulation? 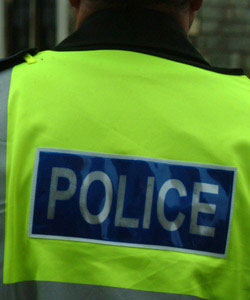 ‘Name and address,’ said the copper.
‘Is there a problem, mate?’ said Roddy, smiling like a visiting dignitary amused by quaint local customs.
‘I’m not your fucking mate,’ said the copper.
‘No need for that language, officer.’
The copper stopped at that and slowly scoped Roddy up and down. Roddy put on a big gleaming smile at the attention. The copper narrowed his dark, glistening eyes and smiled. Adam looked round in the car and shared a worried glance with Ethan.
‘A fucking comedian, aye? Just give me your licence and keep the one-liners for open mic night.’
Roddy handed over his licence and the copper walked to the squad car to radio it in.
‘For Christ’s sake,’ said Adam, ‘give it a rest, will you? You’re gonna get us all nicked.’
‘Relax,’ said Roddy as the copper returned. ‘It’s all in hand.’
‘Visiting the island long, Mr Hunter?’ The copper handed back the licence.
‘Couple of days.’
‘Business or pleasure?’ the officer asked, throwing a contemptuous look into the car.
‘I’m all about the pleasure, officer.’
‘Well, watch how you go, the roads are dangerous this time of year, especially the speed you were going.’ He dug a pad out a pocket and began writing. ‘Here’s your ticket, you were doing at least 90.’
Roddy looked like he was about to tell the copper that the real speed was three figures when Adam chipped in.
‘Sorry, officer,’ he said cheerily through the window. ‘It won’t happen again.’
The copper looked at him as if he was dogshit on his shoe then turned back to Roddy, giving him a hard stare.
‘Like I say, watch yourself this weekend. Islay’s a pretty wild place. I wouldn’t want you getting into any real trouble out here.’

I write things
View all posts by Doug Johnstone →
This entry was posted in doug johnstone and tagged doug johnstone, extract, smokeheads. Bookmark the permalink.