Posted on September 9, 2013 by Doug Johnstone

Here’s a new short story. A bit of context is probably needed. While over in Melbourne recently I was invited to take part in Liner Notes, a cabaret evening where they take a ‘classic’ album, divvy up the tracks to writers, comedians, performance poets, musicians etc, and get each person to come up with a five-minute thing inspired by their track. This year it was L.A. Woman by the The Doors. I got the track ‘L.A. Woman’. Safe to say, I am not The Doors’ biggest fan. 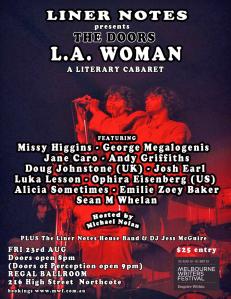 So anyway, I wrote this and read it on the night, in front of a few hundred punters. Went well, especially the Michael Hutchence joke. And some people actually gasped when the main character set fire to some Doors memorabilia. Go figure. Mind, it was a Friday night, and drink had been taken by all involved.

So here you go, hope you like it. If nothing else, it’ll only take a few minutes of your time to read:

She stepped back and checked her handiwork.

He was just coming round. She had no idea how strong the pills were so she’d put three in his jack and coke, to be sure. After he’d passed out he was a dead weight, and she struggled to heave him out to the garage and into the chair. Somewhere along the way he’d pissed his leather trousers. Good, she hated those stupid trousers.

His arms and legs were tied to the chair, tape over his mouth. Blood trickled from his nose where she’d punched his jowly face. Couldn’t resist. His gut stretched Jim Morrison’s face across his T-shirt.

His eyes opened. When he saw her he gave a pathetic grunt.

She walked over to the worktop with the turntable, heels clacking on the concrete. Lifted up the album for him to see. His original pressing of L.A. Woman, signed by the whole band. Twelve hundred dollars in Record Collector. She wasn’t allowed to touch it. She took the record out the sleeve and put it on. His eyes widened. She put the needle on the vinyl and let it play for a bit, creating a moment in her mind. Jim was wanking on about his mojo rising.

She blinked heavily then picked up the hammer. Smashed it down on the record again and again, the skwerk of the needle sliding, the vinyl shattering, then the whole record player in splinters.

He whimpered. It looked like he’d pissed his pants some more.

‘I’ve always fucking hated The Doors,’ she said. ‘You never realised did you? I only pretended to like them at the start to make you like me. How pathetic is that? I hate everything about them – the shitty blues warbling, bullshit Sixties mythology, weak guitar riffs, cliched lyrics – all of it. And Morrison, he’s the worst. Died in a fucking bath, a bloated, deluded wanker. All that leather-trousered rock-god shit. You know what? He was a poor man’s Michael Hutchence at best. At least Hutch had a proper rock and roll death.’

She walked over and punched his face. He slumped in the chair. God, that felt good. It felt great that she’d never have to put up with his macho shit ever again.

She grabbed the metal bucket beside her, showed him the contents. It wasn’t all of his Doors memorabilia, that would take a whole room, but it was the most precious. A signed set list, an original ‘67 tour poster, a gold disc, one of Jim’s necklaces. He’d wasted thousands on this shit.

She lifted the can of petrol and poured it over everything.

‘Listen to yourself,’ she said. ‘You’re pathetic.’

She hit him again, this time in the eye. Broke the skin at his eyebrow. He flinched. The feeling of power surging through her was ecstatic.

He looked like he was going to pass out.

‘How fucking dare you,’ she said. ‘Cheating on me? Really? You don’t deserve me.’

The worst thing was, this other woman was a Doors fan. They’d met at a fan club convention. And get this for irony, she was from fucking Los Angeles, his real life L.A. Woman.

She took a lighter out her pocket. According to the authenticity document, it used to belong to Jim Morrison. Rumour was he’d lit Janis Joplin’s bong with it. She clicked it till the flame appeared.

She dropped the lighter in the bin and it went up with a whoosh that sucked air out of the garage. Smoke pummelled upwards, curling into the corners of the ceiling.

He tried to heave himself free, chair legs scuffing on the floor. He was like a trapped, panicky animal. The lizard king had lost his crown.

The smoke was already stinging her eyes. She opened the garage door then approached him. She shushed him and stroked his lank hair away from his face as he made strangled noises, his eye swollen and closed, snot bubbling from his nose. She raised the hammer above her head.

She brought the hammer down hard on his skull, twice to make certain. Then she dropped the hammer on the floor with a clatter, turned and left, closing the garage door behind her.

I write things
View all posts by Doug Johnstone →
This entry was posted in doug johnstone. Bookmark the permalink.