The Melbourne Writers Festival – a diary

Posted on September 4, 2013 by Doug Johnstone

Some of you who follow me on Twitter or are pals on Facebook will know some of this chat already, but I’ve been down under at the Melbourne Writers Festival recently. I had an absolutely AMAZING time, and met loads of fantastic writers, readers, helpers, punters, and I just wanted to write a quick summary of my time there.

So here’s a quick diary:

Tue 20 – Wed 21 Aug: Travelled. Edinburgh to London to Doha to Melbourne. Fucking knackered. Arrived late Wed night and was staying in the intimidatingly posh Sofitel Hotel on Collins Street. This was the view from my 39th floor window:

So I phoned home and spoke to the kids (awww), necked the complimentary bottle of wine, and fell asleep.

Thu 22 Aug: Wandered around central Melbourne in a jetlagged daze. Lovely city. Everyone kept apologising about the weather. It was warm. What’s the problem? Apparently not warm enough for winter. Popped down to Fed Square to get my bearings, as this was where most of the action of the festival was to be housed: 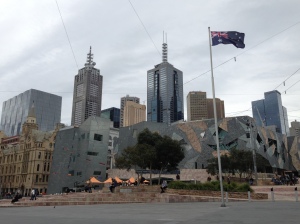 Met fellow Scottish writer Liam McIlvanney in the street. He had just met Kirsty Gunn. This was to become a theme of the week.

In the evening, went out for a few beers with Liam and local writer Andrew Nette, who was chairing our Tartan Noir event at the weekend. They had a big argument about Peter Temple. I hadn’t read him. The beer was expensive.

Fri 23 Aug: Met my good pal Anna Burkey for lunch down some wee alleyway. Melbourne is full of these cool wee streets. Anna used to work for Edinburgh City of Literature, and now does a number of bookish things in Melbourne. Great to catch up, and she gave me a wee tour of central Melbourne, ending up in the amazing state library where she works. Spent the rest of the day wandering around Fitzroy, a bohemian enclave just north of the centre.

In the evening was my first event! About time. It was Liner Notes, up in a ramshackle ballroom in Northcote, a kind of cool but rundown neighbourhood north of the centre. Bonded with Ophira Eisenberg of The Moth fame as the two non-Aussies in the green room. Drank quite a lot of free beer. The evening was awesome – a mix of slam poetry, stand up comedy, music, readings, all sorts. The idea was to do something inspired by the album L.A. Woman by The Doors. I fucking hate The Doors, so wrote a nasty wee story about someone killing their boyfriend, a Doors obsessive. I got heckled by a drunk woman who couldn’t understand my accent. There was some banter. Afterwards, loads of people apologised for her. No worries, I’m used to heckling! All in all a great evening, and here’s what the house band looked like:

Sat 24 Aug: Now they were starting to work me properly. Two events during the day, first This is Scotland with Kirsty Gunn and John Burnside, chaired by Liam McIlvanney. Liam’s opening gambit was to ask if we resented being there, more or less, being asked to represent Scottish writing. No, was the answer. I think just looking at how different all of us were as writers was evidence enough that no single person can speak for a nation’s literature. Incredibly well attended event, loads of ex-pats, but plenty of locals too. Signed a shitload of books after.

Time to grab a quick sushi lunch then onwards to Tartan Noir with Liam McIlvanney, chaired by Andrew Nette, during which we basically rehashed our pub chat, minus the Peter Temple argument, for the audience. I read a nasty bit of Gone Again for the first time, and someone actually gasped! Wow.

At night it was the festival launch party. Free booze and food. Nice. Took it easy, as had an event first thing in the morning. Great to meet more of the staff, especially general manager of the festival Shona Barrett, another ex-pat Scot. Then in the after party, hooked up with Aussie pal Emily Ballou, who lives in Scotland but was also over for the festival. I made my excuses at a reasonable time though, honest.

Sun 25 Aug: Up early for a City of Literature Forum. Chaired by festival director Lisa Dempster and also featuring Melbourne writer Matt Blackwood, it was a really interesting look at how to exploit Melbourne’s City of Lit status and get things done. I was really there as an outsider viewpoint, coming from another City of Lit. The audience were mostly professionals and writers in and around Melbourne, and were very switched on, considering it was 10am on a Sunday after a party. Good work!

Then hoofed it up to The Wheeler Centre to The Art of Crime Writing seminar with Aussie crime writer Angela Savage, chaired by Kate Larsen from Writers Victoria. This was a longer event, with the focus on the writing process, specifically crime writing, of course. Despite differences between mine and Angela’s books, there were a lot of eerie similarities to our histories and processes, and the audience of aspiring writers were really fantastically engaged with the whole thing. The buzz on Twitter afterwards was amazing, folk seemingly really inspired etc, so job done!

In the evening, went out for dinner and beers with Anna B again and some of her pals, to The Calton, a daft old pub with stuffed animals and walls like a bordello. Ate a humungous schnitzel. Good times.

Mon 26 Aug: Spent the day doing touristy shit, buying presents for the kids and the missus, wandering around some more, and hoofing it out to Victoria Street to eat this amazing Vietnamese meal (thanks to a tip off from Aussie-Scot writer pal Helen Fitzgerald):

In the evening, I had my last event, a cabaret evening called Scottish Stories. I decided to play tunes instead of read. Soundcheck was at 5pm. Mike Shuttleworth, the programme manager for the festival, very kindly leant me his lovely guitar. There was free whisky and beer. Then there was some British Council cocktail party thing. More free whisky and beer. Then the gig started at 7pm. More free booze. I didn’t play till around 9pm. By then my tongue had been loosened, it’s safe to say, and I blethered about all sorts of shit on stage, not least the crazy ‘hook turns’ Melbournian drivers do at crossroads. Don’t ask. Also performing that night were the inimitable Janice Galloway, John Burnside, and Aussie contributors Richard McKenzie and Anne E Stewart, who sent a shiver up my spine with her ghost story. Then more booze, you get the picture. But I had to get up stupidly early for my flight to New Zealand,  so that was me, basically.

HUGE thanks to Lisa Dempster and all the staff at the Melbourne Writers Festival for a truly fantastic experience. Especially want to shout out to all the festival volunteers who were relentlessly cheery, friendly and helpful the whole time. I’d love to go back to the city again, such a cool vibe, such a friendly place. Love you, Melbourne!

I write things
View all posts by Doug Johnstone →
This entry was posted in doug johnstone and tagged lisa dempster, melbourne writers festival. Bookmark the permalink.